When Dam and I first started our research for Thailand, we mostly found beautiful and “exciting” promotions for us to “meet”  an elephant and take a ride through the lush jungles.  Having previously heard about the poor conditions in many of these camps, we thought best to continue our research, as we did not want to support the industry which exploited and harmed the animals.

Over cocktails one night in West Seattle, only a week or two prior to our departure, a friend of ours, who lives for part of the year in Thailand, shared a story about a foundation she has worked with for many years noting that it was the  first elephant sanctuary established in Thailand. From the way she spoke so highly of the reserve and her passion and deep love for her favorite elephant, Jokia, we knew we wanted to help as well. 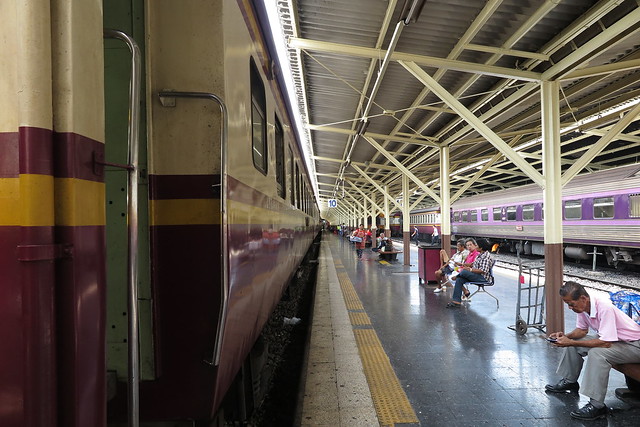 Once we landed in Bangkok, the excitement to see these majestic mammals grew (as well as our disdain for the big city) and we could not wait to embark on our 14 hours train ride up to Chiang Mai where we would find solace in the mountains yet again. Watching the bright green rice fields zoom by hour after hour, and a good night sleep being swayed back and forth along the rails, we had finally arrive in a smaller and more inviting city. 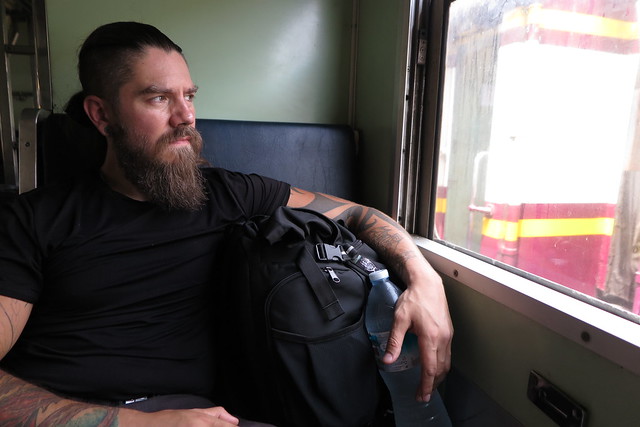 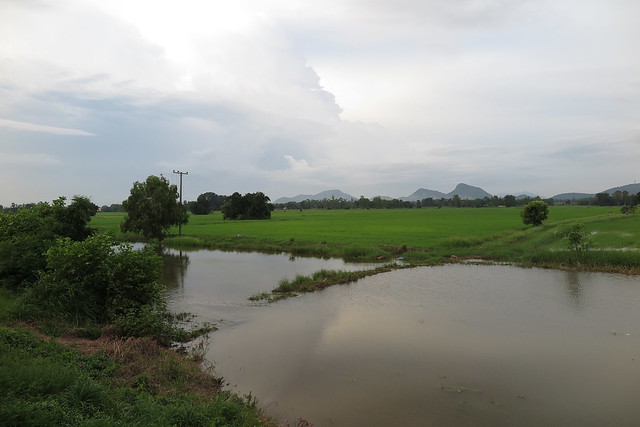 We spent a day acclimating to our new surroundings, discovering new types of street meat and fresh mango smoothies before we rode further into the mountains. As we watched the sun set over the forested hills, we prepped our bags, charged our cameras and awaited our early wake up call for yet another exciting adventure.

Up in the lush, green jungled mountains of Northern Chiang Mai, Thailand, nestled between various trekking camps that promote riding elephants, lives a beautiful sanctuary and rehabilitation center for rescued elephants: most having been found mistreated and both physically and mentally abused, all in the name of tourism or illegal logging. Established in the 1990s, this oasis is now home to more than 70 elephants, all rescued from their harrowing pasts of performing, trekking or logging.

As we made our way up the winding hillside, our guide, Sakchai (or Sunshine as he told us call him), showed us a graphic documentary outlining the gruesome past of many of the rescued elephants within the park. The documentary depicted the barbaric rituals, all performed without tourist knowledge, that is “required” in order to break the spirit of the animal into submission and “domestication”. These rituals have been around for hundreds of years and are incredibly hard to watch.

It begins with the baby elephant. Every time a female elephant bears a calf, the herd lends a helping hand in watching over the baby so the mother can make sure she gets ample nutrition as the baby will breastfeed for up to 4 years. Each calf has a nanny who watches over and protects the baby from harm. When humans seek to find a new elephant for their industry, they will physically attack both the mother and the nanny, leaving the baby open to be more easily kidnapped. They take the baby into the jungle and place it in a small cage and start the breaking process called Phajaan. This process can take weeks and is used so that the baby will forget about its mother and past life. They tie the limbs and trunk tightly, making the elephant stand upright constantly and deny food and water, while sometimes even hitting the elephant with sharp tools and bull hooks then treat the wounds with motor oil. Once the elephant is seeming more docile, they will introduce a handler or Mahout, and in order to establish trust, the Mahout greets the elephant with its first water and food since the capture. After some time, the Mahout will free the elephant from the cage and begin daily “walks” with the animal in circles around a wooden pole, still tightly bound by ropes and chains. After the process is complete, the animal is now ready to begin performing, trekking or carrying logs down the steep ravines of the mountainside.

We watched the film in horror. Having known just a small portion of this grim history prior to coming to Thailand, we were left shocked. Our guide continued the conversation and gave more detail regarding the trekking camps and elephant paintings, saying that elephants who are used for riding work up to 8 hours per day with no break, carrying more than 500 kilos on their back. The elephants who had been previously used for trekking, which we would soon meet in the Nature Park, now had a flat back from the years of added weight, versus a curved back as seen in the wild.

On our plane ride into Thailand, the airline showed tourist films of elephants painting beautiful pictures and both Dam and I naively hoped they found happiness and therapy in painting. We soon found out that the elephants who are used to paint these pictures have a lot of damage to their ears as their Mahout pierces the back of their ear (which are as soft, fragile and sensitive as human ears) with a nail in order for the elephant to stroke the brush in different directions. The documentary showed painting after painting, all the same no matter the elephant or region, as the same tactic of control is used.

As we got closer to the Nature Park, we noticed the multiple trekking camps in the surrounding area. Our guide happily pointed out that though trekking camps are still rampant around Thailand, due to the awareness and activists in America and Europe, many of the camps are quickly dying as tourists are flocking to the sanctuaries now. A few of the camps around the Nature Park have even reached out for help as they have a desire to change their ways and help care for the elephants instead of exploit them. Though the Nature Park does much research on the camp before agreeing to help (making sure the desire to change is not influenced by monetary value), they have helped a plethora of camps throughout Thailand establish a better environment for the animals. 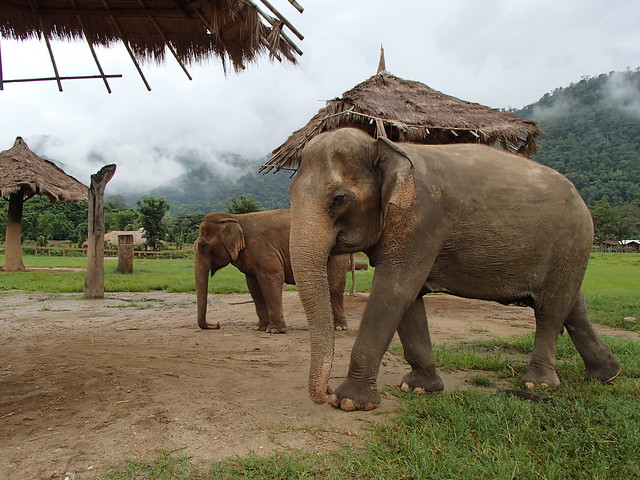 When an elephant is rescued by ENP, it takes time to acclimate the elephant back into a happy and restorative environment. Often times, they come into the camp with physical wounds but the emotional and mental wounds are much stronger and harder to treat. Though each elephant previously had a Mahout (Southeast Asian term for caretaker or trainer) in their past life, when they arrive to ENP, the elephant will pick a new, kinder and extremely gentle caretaker to tend to them for the rest of their or the Mahout’s life. They are also slowly introduced into the herd and many of the elephants will gravitate to the newcomer in order to make a strong friendship bond and ease them into recovery. They will walk through the fields together, play in the river and even sometimes adapt to become nannies of the newest babies who are born in the park. 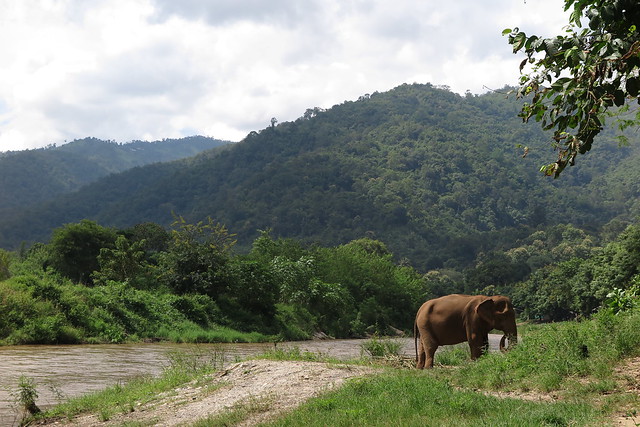 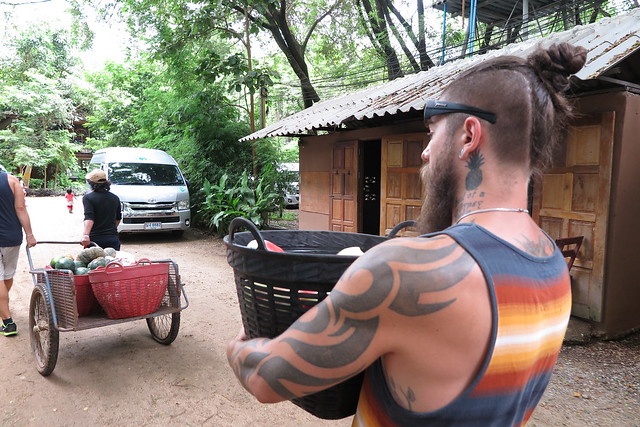 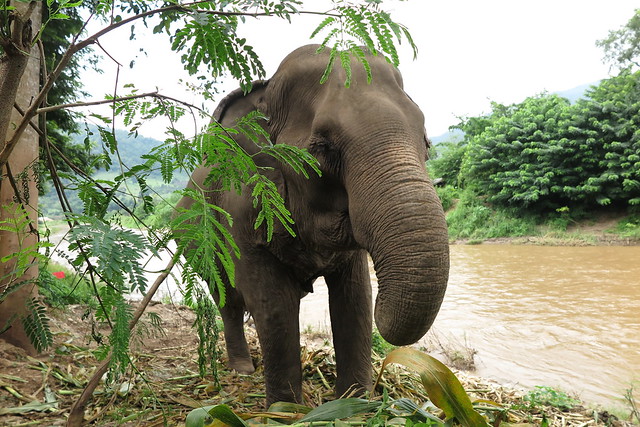 When we arrived, we were greeted by a plethora of happy dogs, as the Nature Park also runs a dog rescue and is now home to over 400 pups! We plopped our bags down and immediately headed to the river where we would meet our first, and soon to be favorite, elephant friend. We packed cucumbers, watermelons and squash in large baskets and trekked them out to meet Mae Kham Sai, a blind and emotionally troubled elephant who was born in 1970. Mae Kham Sai slowly greeted us with her long trunk, outstretched to smell us and check if we had any treats for her. Because she is unable to see, she would need a little extra care while feeding so we guided her trunk to our hands and gently placed the produce at the base where she excitedly wrapped herself around it and quickly deposited them into her mouth. Her ears flapped back and forth, showing sign of happiness, and continued reaching out for more lunch. Mae Kham Sai was rescued in 2005. The owner of Elephant Nature Park, Lak, had first met this lovely lady in 2004 when she found the elephant covered in infection. She offered her Mahout food and a place to stay while the veterinarians at ENP treated her and brought her back to health. In 2005, Lak was able to rescue Kham Sai in to her new forever home at ENP. 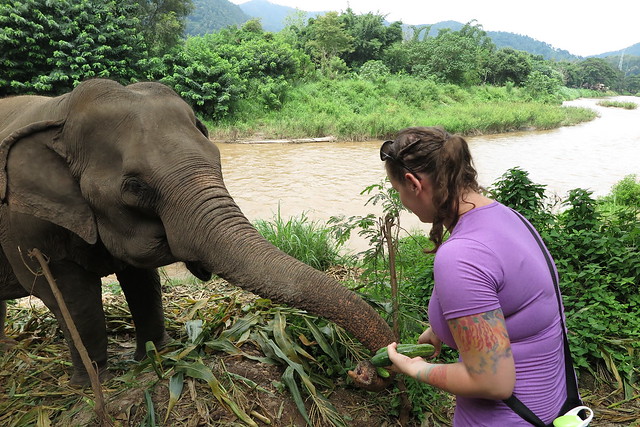 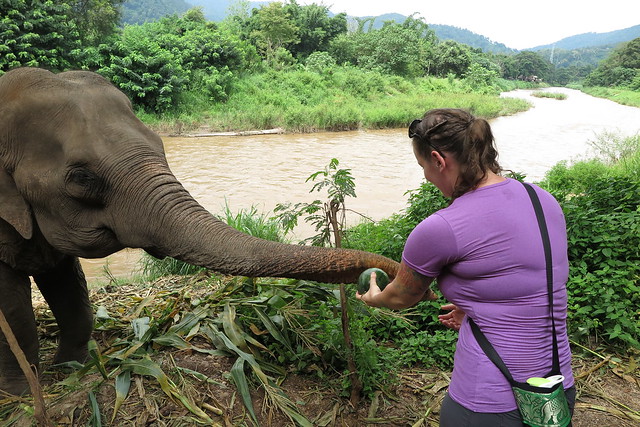 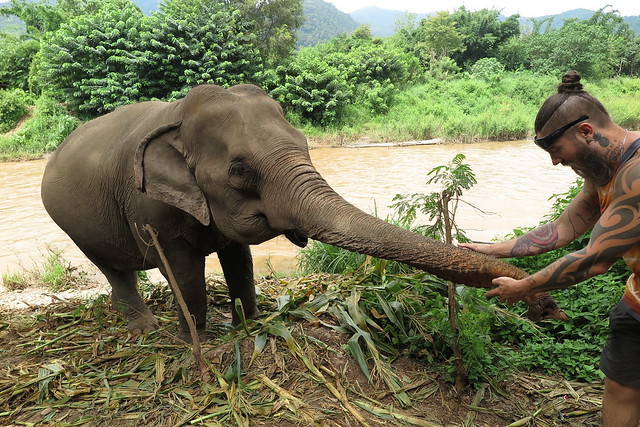 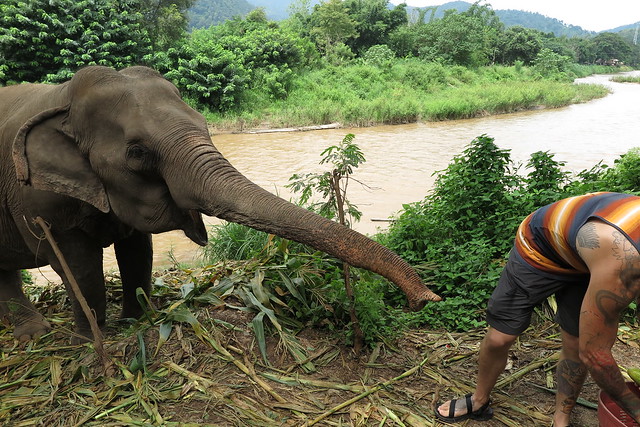 As we got to know Kham Sai over the next two days, we learned she enjoyed long walks along the river and preferred to be alone versus with other elephant friends. Her sweet soul attracted a different type of friend to keep her company. The quiet and ethereal flutter of butterflies surrounded her, creating a peaceful and fairytale like environment for this troubled gal. The softness in her footsteps and the slowness in her movements as she grazed along the riverbank created the most surreal moment during our first meeting. We fed her our last few cucumbers then waved goodbye for the afternoon.

For the next day and a half, we walked, bathed, fed and even listened to the sleeping sounds the elephants make throughout the night. We were incredibly well fed with various vegetarian dishes, local to the region, and made sure to feed the animals with the same standard: all produce organic and free of chemicals. 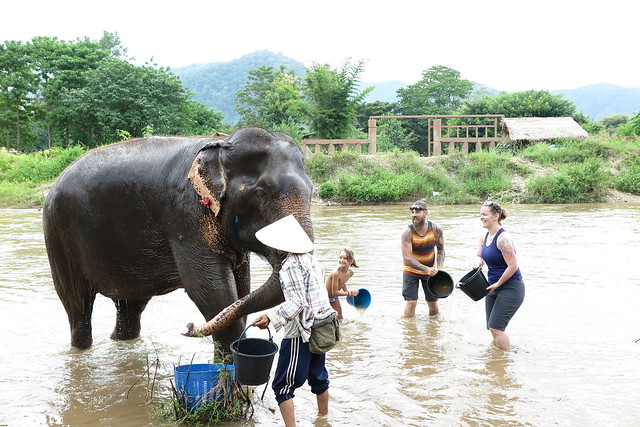 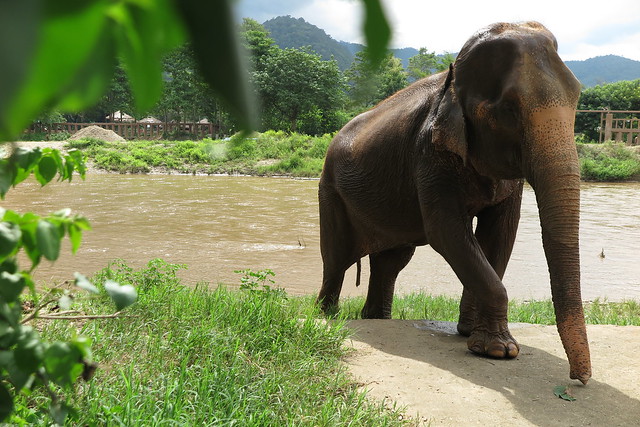 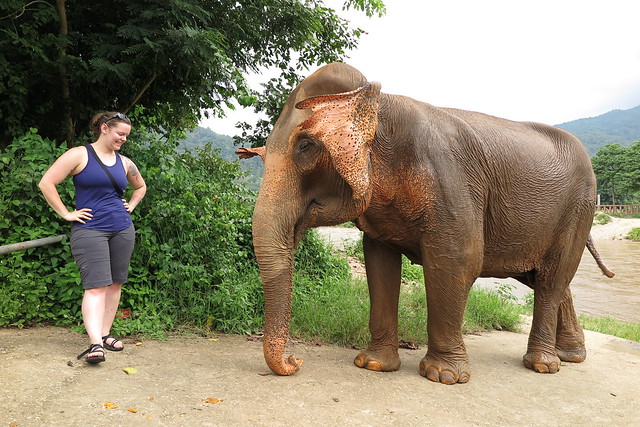 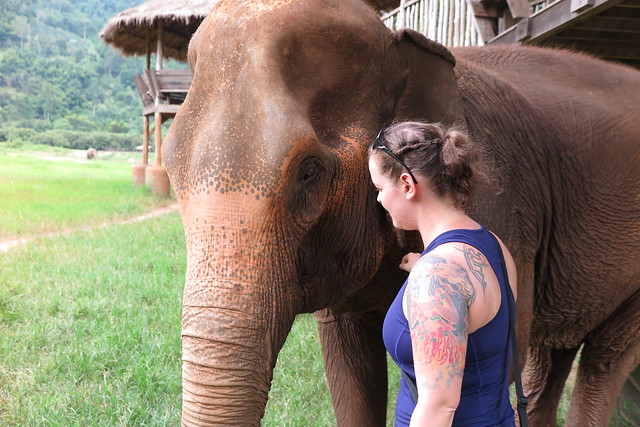 On our last morning, we took a long walk through the grassy fields and over to the river right as the monsoon rains began. Two mischievous lady elephant friends had taken the two babies to the river for a swim. After seeing their caretakers supervise from the banks, they looked at each other then booked it across the river to play on the other side. Though they are free to roam, they must be closely monitored as there are no set boundaries and when they go off into the other camps, they tend to cause damage and the park has to pay a fine upwards of 10,000 baht. As their Mahouts crept closer to the river bank, they playfully rolled around on the other side of the river until the Mahout swam over to guide them back home. We giggled as we watched this epic game of cat and mouse, soaked from the rains but uncaring. 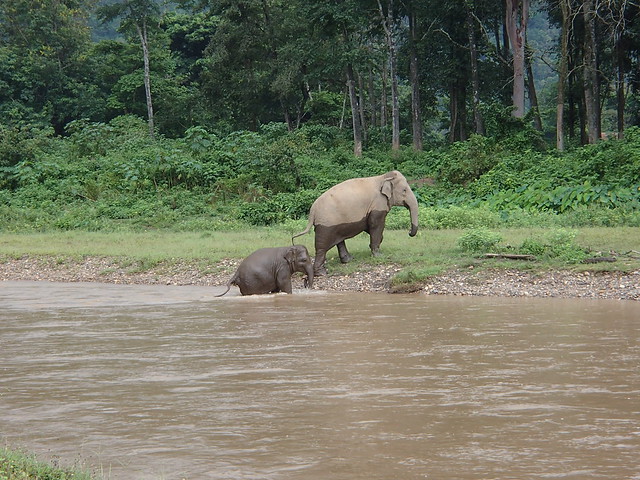 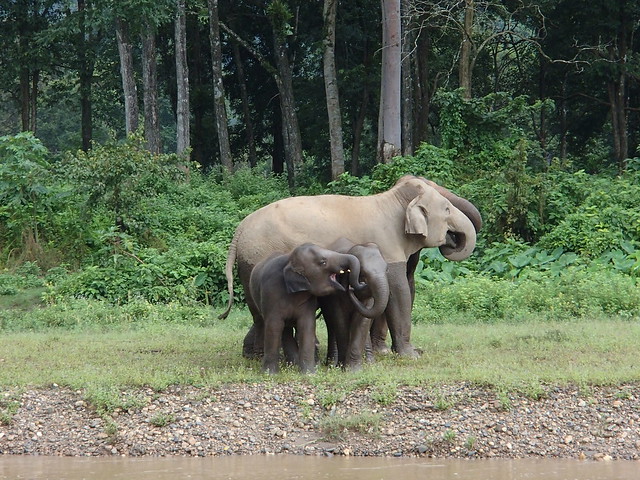 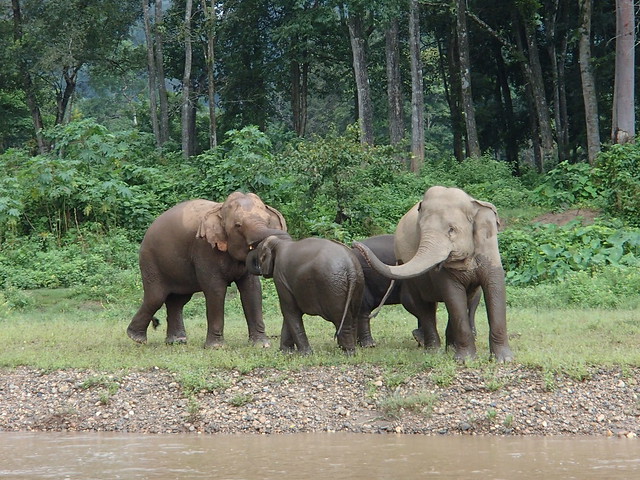 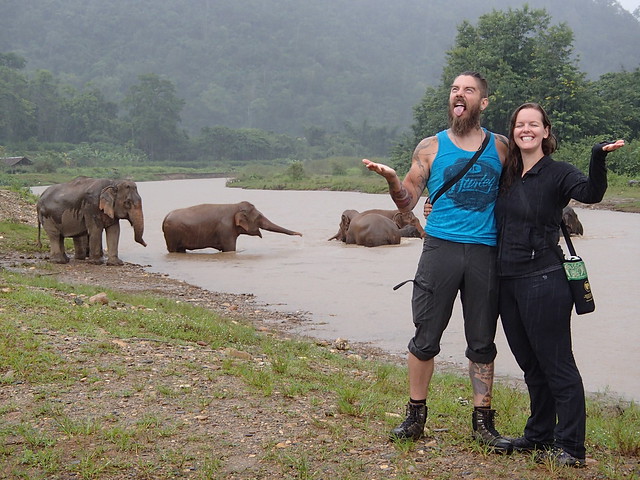 Across the park, Mae Sri Nuan, ENP’s largest female elephant, who was being guided back to her home by her Mahout, approached Dam and began pushing her trunk up to him, wagging her tail and flapping her ears. She was in love! The Mahout realized she fancied Dam, so he gave Dam a whole pumpkin to feed her, which then increased happiness and trust. She gave Dam a quick snuggle before we grabbed our bags and headed back to Chiang Mai. 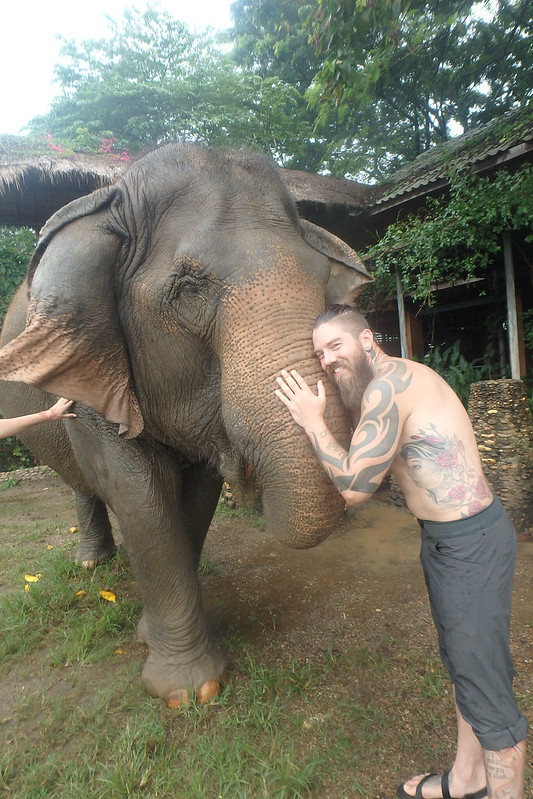 There are many different ways to experience and support the Elephant Nature Park. You can stay for the afternoon, or if time and cost allows, even up to a few weeks. Though the experience is a bit pricier than the alternate camps where you would “meet the elephants”, knowing that we were supporting a good cause and also having seen the amount of upkeep it takes for the volunteers to run the camp and feed the animals, we were happy that we were lucky enough to experience what ENP offers. The bonds that we made with Mae Kham Sai and Mae Sri Nuan will stay with us forever and we can’t wait until we are able to return to these lovely ladies. 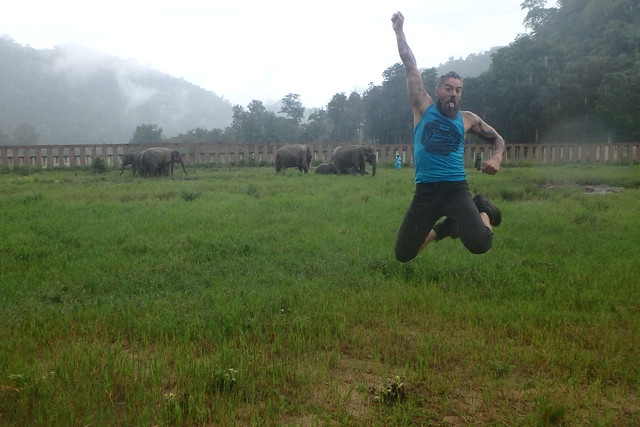 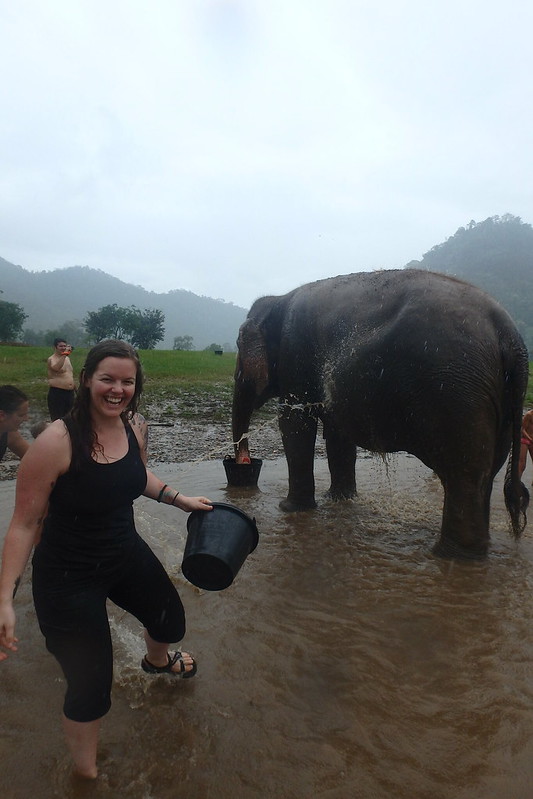 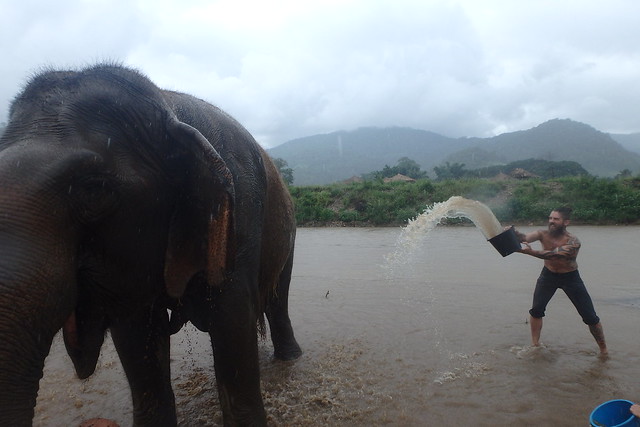 If this article interested you or moved you to learn more, please see The Elephant Nature Park’s website for more information. You can read further about the lives of the rescued elephants or even book your own encounter! 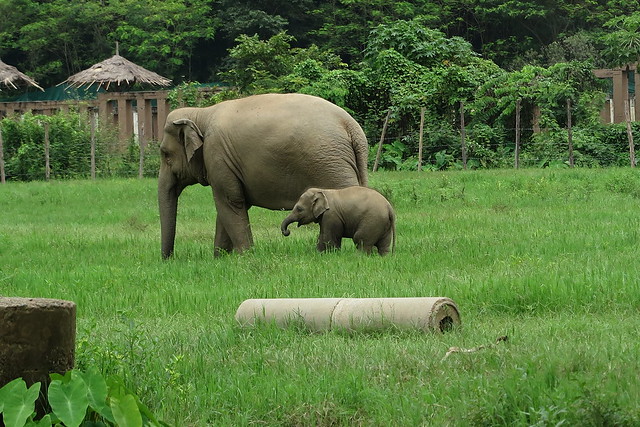